This is “Chester” – I had to change his name to protect him from the cartel he was running on the Texas/Mexican boarder. He had just arrived a week before from the mean streets of Texas and staying in the day care system until a foster (temporary witness protection) or an adoption (full blown witness protection).

When the rescue agency tells you that this tiny brown boy not only was the head of the Chihuahua gang on the streets but also again in their day care too, you know he is the real deal. I didn’t make this up!

I haven’t asked about what brought him to New England and why he needed to hide out and he hasn’t offered any hints so I think it best to just ignore it. So far, he loves the area and the people. 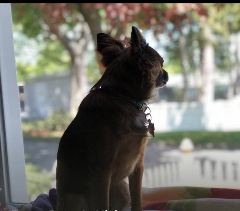 It may be a while before he puts his past behind him and stops looking over his shoulder to see if someone recognizes him, but I have assured him, say the word and decorative outfits will be bought to disguise him. He came to the right house; no snitches here. Whatever it was, I think he was framed.

Give it to me straight....I can take it Cancel reply