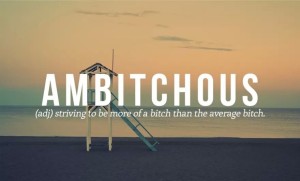 There is a fine line between a woman ‘standing up for herself’ and being a ‘bitch’. I have yet to find that line but I am sure it exists; more often than not, I get the ‘bitch’ label. For those of you that have said it to my face (on many occasions), you can agree that my response has always been, and will always be: stop kissing up.

I have to say that my super-cranky reaction to a situation is just that; a reaction. I am by no means searching out scenarios in which to wield my highly explosive intolerance for stupidity.

The first (and most repetitive interaction) typically involves me waiting in line and getting cut off, as though I have hit my ‘stealth button’ and instantly became invisible. The millisecond response from me is always an unwaivering, ‘are you kidding me?!”  For some reason that seems to startle the offender and wakes them up to the fact that they are no longer on their lonely planet of “I” and must abide by the simple rules of society and it’s strongly recommended guidelines of ‘wait your friggin turn’.

There are times where adults are not pointing out their children’s misbehaving and I have to take things into my own hands. Example: at a college open house for Goose, potential students (17-18 yrs) and their parents are sitting in an amphitheater getting the background on the school and what they offer, finances, etc. and the three young miscreants with their mother were talking loudly and laughing throughout the whole seminar. It was not until the continuously full-blown kicking of my chair, did I spin my head faster than Regan from the Exorcist, and gave my, “are you kidding me??!!” to which the young men horrified, stood up and said they would wait outside. Good call because next comes the pea soup vomit while talking in tongues and no one wants that.

Other times, a good friend needs to have that certain someone on their side, that friend with a bit more bravado then they do. So… while in a Chinese restaurant with my friend (we will call her Shrink because she is one) and her boyfriend were sitting at a crowded bar, I hear a woman complaining to her boyfriend that Shrink is being loud and obnoxious. Really? We are sitting three people away in a packed bar and the only voice you can hear is Shrink laughing and telling stories. Hold the phone and call Oscar Goldman because a new Jaime Sommers is in town! (that’s a late 70’s reference for you kiddos) but I digress. I walked over to her and called her out on it, citing the fact that it’s a loud bar and there is no way she should be calling my friend names without provocation. As she turned to her boyfriend and started to curse about me, I kindly noted that I was not using profanity in any way and name calling wasn’t necessary… just apologize to my friend. The boyfriend stood up (a good 6 inches taller than me) and became aggressive to which I stood my ground and said that he was not part of the conversation, I was talking to his foul mouthed girlfriend. He then called me a bitch (yes I had to say, stop kissing up, it’s a natural reaction) and then he poked me in the shoulder a few times. I nicely reminded him that unwanted poking is considered assault and that seemed to warrant him screaming me a few other choice words but stopped the poking. No better way to show your pea-sized brain than to scream profanities; boring, yawn, over it.

So you see, I have been mislabeled and misunderstood my whole life. I will not be walked on or overlooked. I demand as much space in this world as the big jerks that seem to be taking over.

(P.S. if you know to whom I owe credit for this awesome intro picture please let me know!)

Give it to me straight....I can take it Cancel reply